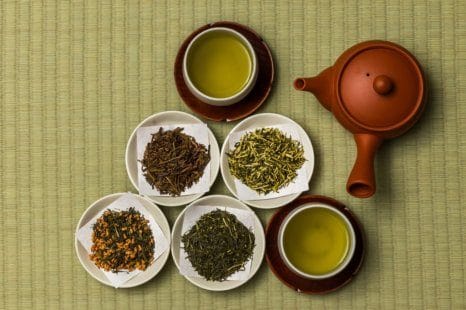 Although the question may seem obvious, in the West there is confusion about what tea is. The tea (茶, cha) has its origins in China, where bitter leaves were heated in water. The tradition of drinking tea was later imported to Japan due to the long history of exchanges between the two nations. Although there are hot drinks that contain flowers or fruits, in the strict sense, tea is just that: bitter leaves in hot water.

The first known records of the practice of drinking water with bitter leaves date back to the 8th century. He Cha ching is a compendium in which different types of tea and their preparation are described. In Japan, the practice of tea spread during the Nara period.

The most famous Japanese tea, perhaps it is matcha tea (抹茶), whose characters mean (rubbed tea). A matcha tea is pulverized with a stone pinwheel, and it is so fine that if you put your finger on the tea, your fingerprint remains. Due to its sweet taste, in addition to being used in drinks, it is used in sweets and pastries. What makes matcha tea special is that it is exposed to the sun without being pressed.

Tencha leaves before being turned into matcha

He tencha It is basically the green tea that the matcha. The leaves have been processed and dried, but have not been pulverized. Have means “grind,” and refers to an intermediate product before turning matcha. Although most of tencha it is finally processed, it can also be taken as a leaf.

Sencha, which is the tea we normally consume today

Sen means “infusion”, so sencha is the most basic meaning of tea: leaves in hot water. He sencha was invented in the 18th century, and before that, tea had a minor category as bancha (tea made from older leaves, or sometimes roasted), or matcha, as described above. Today most teas are infusions, but before, the sencha It was a Japanese tea that was separated from the one that is served and beaten.

Kabuse comes from kaburu (被 る), which means “to cover.” The leaves of the kabuse sencha They are covered for several weeks during the growing period, this makes the plant produce more chlorophyll and the leaves are more tender, producing a rich and delicate flavor. He sencha is traditionally grown uncovered, so the kabuse sencha is a subcategory. Many other types of teas are covered during their cultivation, such as matcha.

Fukamushi means “intensely vaporized.” Much of Japanese tea is steamed for 30 seconds to a minute. He fukamushicha exposed to steam for two to three times longer. The technique makes the tea dark green in color, with an intense flavor. The opposite would be asamushicha (浅 蒸 し 茶), which has a short period of exposure to steam.

He gyokuro It is considered the highest quality green tea, and is a type of kabuse sencha, but its cultivation period is two weeks to twenty days earlier than normal teas. When covered with reed and straw, the theanine flavor is accentuated umami, while the astringent flavor theanine is suppressed, giving it a unique aroma.