In the ancient Nihon-Shoki or Kojiki books written in the 8th century, descriptions of what appear to be grapes can already be found. Grape motifs can also be found in drawings from the Nara period. Therefore, we can assume that at that time, the Japanese already knew what a grape was.

The Koshu grape (甲 州) is a typical Japanese grape variety, indigenous to Europe, used to make Japanese wine. It was introduced to Japan in the 8th century with the teachings of Buddhism. 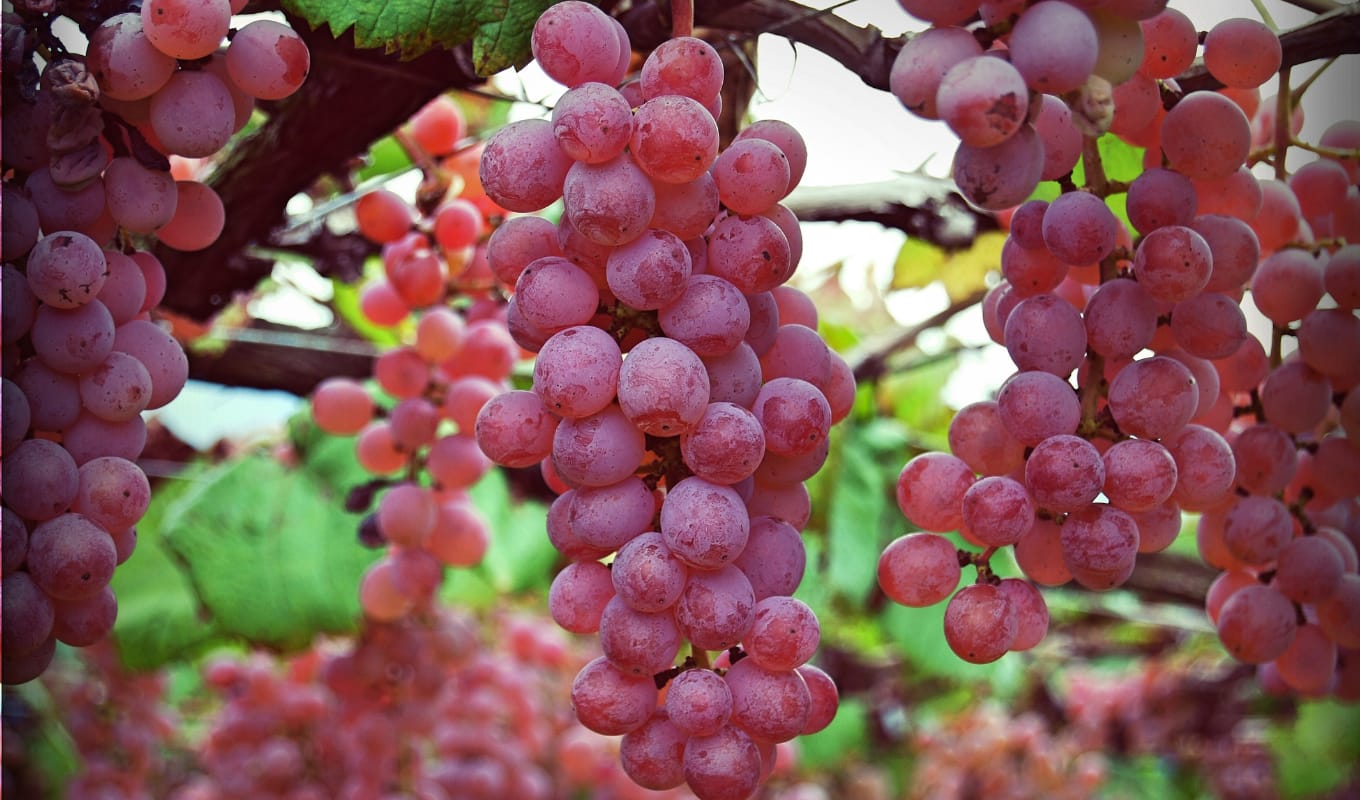 Until the fourteenth century, the Japanese consumed the grape as a fruit because in Japan there was already the production of alcohol from rice, sake, and they did not feel the need to produce another type of alcohol. Descriptions can be found in texts from the end of the 16th century talking about “European alcohol” and even today it is considered that wine is spoken of.

Contents
Who Was The First To Introduce Wine To Japan?
Wine In Japan After Edo
Japan’s First Private Winery
Wine By-Products Were Used During Wartime
How The weather in Japan Affects Vine Growing
What Are The main wine regions of Japan?
Yamanashi Wine
Nagano Wine
1, Kikyogahara wine
2, Chikumagawa Valley Wine
Hokkaido Wine

Who Was The First To Introduce Wine To Japan?

When missionary Francis Xavier arrived in Kagoshima in 1549, he offered wine to the local lords; and with the flourishing trade with the Portuguese and the Dutch, wine as an alcoholic beverage gradually spread among the Japanese, but not to the point of producing it in the interior of the country.

During the Edo period, grape consumption increased and grape cultivation expanded in and around Yamanashi. Commodore Perry came to Japan in 1853 and 1854 to request the opening of the country to the Tokugawa Shogunate and Commodore offered wine to the Shogun.

Wine In Japan After Edo

After the opening of the country in 1868, the emperor regained power and decided to modernize Japan, he considered that it was far behind the western countries.

The Meiji Emperor (Mutsuhito), who was a wine lover, encouraged grape growing and winemaking as part of Japan’s industrial development and, together with the government, decided to import grapevines from Europe and the United States. In addition, at that time, the rice harvest was very low, so the government preferred to keep rice as food and not as raw material to produce sake.

The Japanese began to make wine through the information contained in books and through the knowledge transmitted by foreigners.

In 1874, they managed to produce the first Japanese wine with the Koshu species, but as the winemaking technique was not yet at the point of producing wine of stable quality, this establishment would be closed sometime later. In 1877,

Japan’s first private winery was founded and Tsuchiya Ruken and Takano Masanori were sent to France from this establishment to learn the technique of winemaking for 2 years. Unfortunately in 1886, this establishment broke up and each continued to study and produce wine separately.

At the same time, in Niigata, Kawakami Zenbei learned the technique of growing grapes from Tsuhiya Ruken who returned from France. Zenbei then imported many types of vines from Europe and the United States and studied the different species of grapes in order to cultivate them adapting them to the climate of Japan.

Finally, in 1972, he succeeded in developing unique varieties adapted to the climate of Japan, such as Bailey A muscat, which is still widely used in Japanese winemaking.

But the taste of the wine was not adapted to the Japanese palate to accompany Japanese cuisine and its elaboration continued aimed at the production of sweet fruit wines.

Wine By-Products Were Used During Wartime

During the Second World War, the government encouraged winemaking: it was not to have wine as a drink but to have tartaric acid obtained after winemaking. This acid was used to make submarine detectors so all the warehouses were placed under state control. The Tokyo Olympics in 1964 and the Osaka World Expo in 1970 gradually shifted the Japanese diet towards the West and increased wine consumption. During the economic bubble of 1980, the “Beaujolais Nouveau”, which still causes a sensation every year today, was a great success.

Wine consumption is gradually increasing, but for the spirits market as a whole, the proportion of fruit alcohol sales volume remains low at just 4.4% (FY 2017).

How The weather in Japan Affects Vine Growing

Japan It is drawn from north to south and the grapes are grown throughout the country: in basins, mountainous regions, hilly regions, by the sea … But in general, the climate in Japan is humid, except in Hokkaido.

There is a rainy season between June and July, then the typhoon season between August and September, and finally, at the time of the grape harvest, the autumn rainy season. Native Japanese grapes such as Koshu, Muscat Bailey A, and Delaware are adapted to this very humid climate and are resistant to vine diseases.

Many farmers grow these species, but the proportion of the production volume of these traditional varieties for wine is only 40%. Winegrowers try to grow European varieties, but this humid climate is not favorable. However, merlot is grown in many regions because it is relatively well adapted to the Japanese climate.

Unlike in Europe and the United States, where plantations are organized in hedges, in Japan vines are organized on shelves for several reasons: -During the rainy season the soil is too wet, the leaves near the fruits will lack sunlight and the vines can contract diseases.

As water is abundant in the soil, if the vines are organized as in Europe, the stems absorb too much water and the fruits lose flavor.

What Are The main wine regions of Japan?

Wine is produced throughout Japan, in Kyoto, Osaka, Hiroshima, and also on the island of Kyushu. But the main wine regions of Japan are Yamanashi, Nagano, and Hokkaido.

There are about 280 wineries and 30% are concentrated in Yamanashi Prefecture. Yamanashi Prefecture is the largest wine producer in Japan. The city of Kofu, the capital of Yamanashi Prefecture, is located west of Tokyo and is the closest wine region to the country’s capital, just an hour and a half away by train. Therefore, you can go back and forth during the day to visit the wineries.

Yamanashi Wine Center is right next to Kofu. Yamanashi Prefecture is surrounded by mountains: to the south Mount Fuji (3776m), to the west the Japanese Alps (more than 3000m) and to the north the Yatsugatake Range (more than 2900m). These mountains protect it from the rain and even during the rainy and typhoon season the rainfall is low (around 1100 mm) and the duration of the sun’s rays is relatively long.

The geology is composed of granite and andesite and the soil is essentially a layer of sandy clay. It is not very suitable for growing rice, but it is suitable for fruit trees such as vines. It is not known exactly when and how the grapes arrived in Japan, but several ancient texts show that grape cultivation already existed more than 1000 years ago.

In recent times the Koshu grape is cultivated to produce wine, but at that time it was cultivated to be consumed as fruit. As grape growing was already very active in Yamanashi (Koshu), the Meiji government built the first wine-making facility in the 1870s. Thus, the history of Japanese wine began in Yamanashi.

The fruits of Koshu are covered by a thick skin that protects them from diseases. In addition, the grapes are not densely packed in bunches and there is a space between them that allows the passage of the wind and protects them from diseases caused by humidity. These characteristics may be what allowed Koshu to survive in the Japanese environment.

There are two wine regions in Nagano: Kikyogahara and the Chikumagawa Valley.

The Kikyogahara region is situated at an altitude of 700 m. It is surrounded by mountains: the Japanese Alps to the west, the Southern Alps and Yatsugatake to the east, and the Kiso Mountains to the south.

These mountains protect the region from rain clouds so rainfall is low (around 1100mm) and the duration of the sun is relatively long. As the altitude is high, it is relatively cool in the afternoon, even in summer, and the difference in temperature between day and night is significant, which is favorable for growing vines. In winter, however, the temperature is below -10º on some days, so the variety that can be grown in this region is limited.

Since there is no river in this region, it was impossible to have rice fields and for a long time, Kikyogahara was an uncultivated region. From the beginning of the Meiji era, with the encouragement of the government, the cultivation of fruit trees such as vines began.

Viticulture began in 1890, first with American species, and winemaking in 1903. Since 1976 Merlot has been grown in large areas and Merlot from Kikyogahara has received medals several times in many competitions.

The specificity of this region is the cultivation of European species through the practice of planting hedges for the vineyards. Winegrowers try to grow European species like Sauvignon blanc, Pinot noir, etc. Now the Chardonnay from the Chikumagawa Valley is famous.

It is the only region in which there is no rainy season, rainfall is scarce but there is not enough sun, so ingenious solutions were needed to practice viticulture.

The first vine was planted in Hokkaido in 1875 with other fruit trees and in 1876 the first winery was established. Unfortunately, a year later it was closed. In the 1960s, the wild grape winemaking project started in the Tokachi region.

Then, in 1975, Germany donated the German species Zweigeltrebe and in 1976 the cultivation of this species for winemaking began. It was in this year that the history of Hokkaido wine really began.

Now Hokkaido ranks third in the production of grapes for wine production. As the climate is unfavorable for the vines, a lot of effort was required. Unlike other forms of planting, Hokkaido creates hedge installations in which the stem of the vine runs parallel to the ground. This method involves burying the stems of the vines in the snow to prevent them from being exposed to cold air and being damaged by frost.

When the grapes are harvested in autumn, the stems of the wires are removed and placed in the ground to prevent them from breaking under the weight of the snow and thus overwintering under it (the temperature in the snow does not fall below -3 degrees).

In spring the stems are lifted and reattached to the wire, one by one. This requires a lot of work, but it is an innovative technique for growing the vine.
German species account for a large part of grape production, but many European species are currently grown.

Odaiba is a city located within the limits of the bustling metropolis of Tokyo, on the main island of Honshu,…