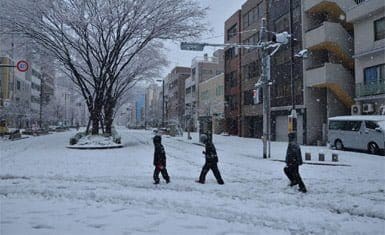 From north to south, Japan experiences a very diverse climate, but except for the islands to the south, winter in Japan can get very cold. In Hokkaido, the most popular region in Japan, it reaches -15ºC. The Hokuriku region, which is on the northwestern side of the Sea of ​​Japan from Honshu, is known to be an area of ​​heavy snowfall. Even in Tokyo the average temperature in January is 5ºC. Faced with the cold winter, the Japanese have adapted.

Recommendations to survive the winter in Japan

He kotatsu, for example, it is an essential heater to survive the winter in Japan. It is a low table that connects to the current and is covered with bedspreads to keep the legs warm. It was invented in the Muromachi period (14th to 16th centuries), but it was placed over a small fireplace on the living room floor. Later, the heat source was changed to charcoal, and finally in the 1950s the first kotatsu electric, which immediately became popular. In more recent years, the kotatsu it has adapted to the lifestyle of the Japanese. Models have been made that can be used as tables without the bedspreads in summer. Bedspreads with designs that appeal to young people are also sold.

Other devices such as heaters, heated floors, and heated air conditioners are used as well, but the kotatsu it is more efficient in terms of electricity consumption. Even during winter in Japan there are people who prefer to sleep inside the kotatsu instead of sleeping on your futon!

Although the kotatsu it is very convenient, it has the disadvantage that it can only be used inside the home. To go out, hot water bottles or bags are used. The containers are made of ceramic or other materials that retain heat for a longer time. Although they have been used since ancient times in China and Europe, bottles (yutanpo) have become popular in recent times in Japan with a view to saving energy and generating less waste.

Many people, especially children and young women, prefer to use covers with characters from anime that make them more striking. Containers in the shape of stuffed animals have been designed for children. Other products include devices that charge to keep the liquid warm, and can be used repeatedly just by plugging them in for 15-20 minutes. Another model is a bag filled with a kind of gel, which when heated in the microwave for 40 or 50 seconds can keep it warm all night.

Likewise, other appliances such as electric sheets have also been introduced, but also in other accessories such as shawls, leg sheets, rugs, sleeping mats on top of them, sleeping bags and leg covers.

There are also some hand warmers called kairo that fit in your pocket and serve when going out. In ancient times they used hot stones as a heat source, but in modern times there are products that generate heat by oxidizing benzene vapors with a platinum catalyst. Later more modern versions were released that use an iron oxidation process. They can be found in pharmacies and convenience stores.

When it comes to fashion, the Japanese are very conscious people. They have even developed lightweight clothing that fits the body and has heat-insulating properties. The technology, known as HEATTECH began to be distributed in 2003, and consist of synthetic fibers that absorb heat from the humidity of their environment. The body’s perspiration is absorbed by the fibers and is converted into heat energy, causing the material to heat itself. From then on, underwear was developed with this fiber, which not only allows to conserve heat, but also does not retain bacteria or odors, as well as being elastic.

Today, the largest manufacturers of clothing, underwear and sports goods develop underwear with these characteristics. Due to the energy saving strategy of the Japanese government in recent years, many companies have increased their sales.

Harajuku is a place in the city of Tokyo that is known for the fashion “Kawaii” (Pretty, Cute), extravagant and…