Perhaps the most representative image of Japan, apart from the geisha are the samurai. These were the warriors of Japan in pre-modern times. They represented the military class that later became the dominant group until the Edo period. It is assumed that a samurai had to comply with the ethical code of the bushido (The warrior’s path). This code emphasized loyalty to the teacher, self-discipline and self-respect, and ethical behavior.

Their origin dates from the Heian period (794-1185), when they were hired by lieutenants who had become powerful and independent from the central government, and hired armies for their own protection. In this period the central state had lost control of the rural areas. The lieutenants had to fill that power vacuum with a new warrior class. The Minamoto and the Taira they were the two most powerful clans. They soon fought each other for power. The Minamoto triumphed, establishing the shogunate (government of the military class) as the new status quo. 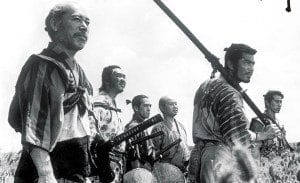 During the Muromachi period the country was divided into several small states that fought each other, so warriors were in great demand. This period is where Kurosawa’s most important films are set. Later, by the year 1500, a single state was consolidated that positioned the warrior class at the top of the social structure, followed by farmers, artisans, and lastly merchants. During this period, the samurai to live in the castles of the villages under the custody of a daimyo (feudal lord). The samurai without a daimyo They were called ronin, and they were rebels who caused riots during that century.

In the period Edo that lasted about 250 years came a relative peace, so the importance of martial arts knowledge declined. Many samurai they became bureaucrats, teachers, or artists. However, the feudal period came to an end until 1868 with the beginning of the Meiji restoration, and a few years later the class of samurai.

The Meiji Emperor’s reforms took power away from the samurai already daimyo. The capital was transferred from Kyoto to Tokyo. Various of the ancients samurai they ended up enlisting in the government army. Others rose up against them in the Satsuma Rebellion, where they were defeated and the age of the samurai It ended.

A famous legend of the samurai is that of the 47 ronin. Legend has it that the daimyo Asano Naganori tried to kill Kira at Edo Castle. In his attempt he managed to hurt him, but not kill him. As it was forbidden to use swords in the castle, he was forced to commit seppuku (suicide). After his death, his territories were taken from him and his family was left destitute. It was expected that their samurai would commit seppuku following the luck of his daimyo, but 47 of them decided to live and get revenge on Kira.

On a winter night they broke into the castle and killed the samurai of Kira. Then they cornered him and gave him the option to commit seppuku and die honorably. As he did not dare, he was finally executed by Oishi, the leader of the ronin. After taking revenge they committed seppuku 46 of them. The last ronin he had been sent as a messenger to spread the news and was pardoned. After his death he was buried along with the others ronin in the temple of Sengakuji.

Kochi prefecture is located on the southern coast of Shikoku Island in Japan. It is famous for its natural beauties,…

Tonkatsu teishoku: Tonkatsu, rice, soup, salad … this is 1,630 yen. Tonkatsu was invented in the late 19th century and…