Kimitake Hiraoka, better known as Yukio Mishima, was a Japanese novelist, playwright, actor, director, and poet. Yukio Mishima went nominated for the Nobel Prize in Literature on three occasions. The Japanese writer came to acquire such fame and popularity that he is considered one of the most significant Japanese authors of the 20th century. A prolific writer, he produced several works just for profit. Its creative catalog includes a film, a libretto, eighteen scripts, twenty books of essays, twenty fiction books, and forty novels. His most significant work combines modern literary styles with traditional Japanese elements, where sexuality and morality are constant themes. Mishima won the Shincho Award, the Kishida Award for Drama, the Yomiuri Award for the best novel, and the Yomiuri Award for the best drama. 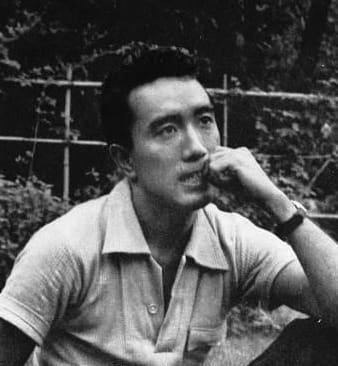 Yukio Mishima was born in 1925 with the name Kimitake Haraoka in the vicinity of Tokyo. His father worked as a governor. As a child, Mishima’s life was influenced by his grandmother Natsu, who separated him from his family for a long time in Mishima’s life. Natsu had grown up in the house of Prince Arisugawa Taruhito. His upbringing there gave him an aristocratic air, despite the fact that Natsu had married a bureaucrat. Mishima’s grandmother prohibited me from playing sports and was dedicated to playing with his cousins. The father feared that Mishima would become very feminine, and was dedicated to destroying the first attempts at Mishima literature, which he considered little masculine.

Yukio Mishima attended Peers School in his childhood. By this time, Mishima was already an avid reader. He read works by Japanese classical writers, but he also read works by Rainer Maria Rilke and Oscar Wilde. Inspired by the poet Michizō Tachihara, Yukio Mishima wrote poems in waka (a style of Japanese poetry). In that school, he published his first work for a literary magazine. His instructors were so impressed with the boy’s writing that they prompted him to write for the magazine Literary Culture. His teachers were the ones who came up with the pen name “Yukio Mishima” to protect the child from the teasing of his peers.

Already older, at the beginning of World War II, Mishima received orders to report to the Imperial Japanese Navy. When he reported, Mishima had signs of being ill and lied to the doctors telling them he had tuberculosis. Thus, Mishima was released from duty. Then he entered the University of Tokyo. Although his days were dedicated to school, at night he was dedicated to writing. In 1947 he managed to graduate. Shortly after graduation, Mishima received a letter from the Ministry of Finance, where he worked for only a year, as the work tired him and he decided to dedicate himself to his career as a writer.

His postwar works included serialized novels, short fiction books, essays, novels, and contemporary versions of Kabuki and Noh. In 1948, Mishima wrote Confessions of a mask, a work that tells the story of a young man who must make his way between the current of society and its homosexual desires. Many of his works were translated into European languages ​​and Mishima gained a reputation for his significant talent in Europe and America. By the age of 24, Mishima had become a celebrity. Despite his fame and subsequent nominations for the Nobel Prize in Literature, once Yasunari Kawabata received the award, Yukio Mishima understood that the chances of a second Japanese citizen winning the award were slim.

In 1952 Mishima traveled to Greece because he wanted to know about the cradle of Western classical culture. On his journey, he met the legend of Daphnis and Chloe, which inspired the creation of his work The Sound of the Waves (1954). Various contemporary events also influenced his style. His novel The Golden Pavilion (1956) it was based on the famous Kyoto Temple fire.

In 1955 Mishima began weight training. His rigorous weekly regimens continued until his death. He had also become an agile practitioner of the kendo. Despite his evasion from military service in his youth, he later became known for his political support for the remilitarization of Japan. Mishima was a member of the Ground Self-Defense Forces and underwent various training processes in 1967. In 1968, Mishima used his reputation and martial training to found the Tatenokai wave Shield Society. His paramilitary organization pledged allegiance to the abstract notion of “the voices of heroic death,” and supported Japanese nationalism and the return of Emperor Hirohito to his divine status as Emperor.

In 1958, Mishima married Yoko Sugiyama, and the following year they had a daughter named Noriko. Four years later they had a boy named Ichiro. However, Mishima frequented gay bars. Many people, including his wife, tried to ignore his homosexuality. This prevented many of the lovers from taking the initiative. Even years later, the sons made joint efforts to prevent Mishima’s sexuality from being made public, suing those who claimed to be witnesses to such relationships.

Meanwhile, Mishima continued his radical nationalist project. Convinced of his political beliefs, members of the left rejected him for his anarchic interpretation of the samurai code, the bushidō. The far-right accepted him after his statements that Emperor Hirohito should have resigned from the Chrysanthemum Throne (the current symbol of the Emperor).

In 1960 he began his acting career, starring in the film Afraid to die, of Yasuzo Masamura. After this role, he was followed by others in films such as Black lizard (1968) and Hitokiri (1969). In addition to her acting work, she also worked as a model. Eiko Hosoe’s photographic set for her work stands out Ba-Ra-Kei: Ordeal by Roses. He also modeled for Tamotsu Yato in OTOKO: Photo Studies for Japanese Young Men and Young Samurai: Bodybuilders from Japan.

Perhaps more than his work and life, his death is precisely what ended up making him famous. Mishima, at the head of four other members of the Tatenokai, was introduced to the Camp of the Self Defense Forces in Ichigaya. This camp was located in Tokyo, and he gained access under the excuse that he would bring his men to a meeting. The five men tied up the commander to his chair and unfurled a poster mentioning his demands. Furthermore, Mishima had prepared a manifest to clarify your political beliefs. Mishima wanted by this to inspire the soldiers to take up arms and overthrow the government. However, Mishima failed to convince the Self-Defense Forces and at the end of the speech was booed.

After his failure, he returned to the commander’s office, where he committed seppuku with the assistance of Masakatsu Morita, one of his most loyal followers and friend. However, due to its inexperience with the sword, Masakatsu failed several times before managing to cut off Mishima’s head. There are experts who say that Mishima had been planning suicide for more than a year and that in reality, the coup attempt as an excuse to execute him.