For as long as the records have been kept, Osaka has been known as a melting pot where people come from all regions. Osaka sits at the confluence of the busy Seto Inland Sea and the rivers flowing inland to Osaka Bay. Long ago, the city built its reputation as an economic pillar and was often thought of as the gateway to the archipelago, welcoming seafarers, travelers, and traders from all over Asia.

Osaka flourished as Japan’s economic and political center around the 5th century. Naniwazu, which is believed to have existed in the area around present-day Chuo Ward, Osaka City, was a freshly constructed port that served as a gateway to the outside world.

Buddhism, which had not yet been propagated in Japan, was also introduced at this time. This information and technology spread out to the rest of Japan at astonishing speed.

As Buddhism spread throughout Japan, Prince Shotoku constructed Shitennoji Temple in 593. In 645, Emperor Kotoku packed his bags and moved the capital from Nara to Osaka.

The Naniwanomiya Palace, built by Emperor Takatoku, remains in Osaka City. The Site is now a Park and can be visited.

It is believed to be the oldest imperial palace in Japan. However, the capital later moved Nagaokakyo, Nara, Kyoto, Kamakura, and Edo (Tokyo).
Even as the capital moved, Osaka always continued to develop as the second-largest city and as a window for diplomacy with Asian countries.

In 794, Japan’s new capital was established in Kyoto. From that year, the Heian Period kicked off, and a number of Buddhist temples were constructed in both Osaka and Kyoto. Arts, crafts, and literature, such as Murasaki Shikibu’s classic tale of court intrigue, romance, and shenanigans, the Tale of Genji (Genji Monogatari), also flourished.

In the late 1100s, however, a movement to overthrow the powerful Taira clan became active, and the Minamoto clan succeeded in defeating it. The Minamoto clan succeeded in defeating them, and Minamoto no Yoritomo came to power and established the Kamakura shogunate. From this point on, the country entered the Warring States Period, a period of frequent warfare.

In the 14th century, Osaka was hit hard by frequent warfare, and in 1496, priests, Rennyo, began the construction of Ishiyama Gobo.

In the preceding part of the Muromachi period (1336-1573), the infamous warlord Oda Nobunaga attempted to take the Uemachi Plateau. The Uemachi Plateau, as the name suggests, is a gently sloping plateau, which is clearly visible when looking at Osaka today and is a good spot from which to view a panorama of the entire Osaka area.

At the time, Osaka Bay was very close to the Uemachi Plateau, making it difficult for a hostile force to easily capture the area. Another important point is that the city was wedged in between the formidable Yamato and Yodo Rivers.

Waterways were the main means of transporting good at that time, and since many merchant ships would come from the Seto Inland Sea, the city could also dominate the economy as a trading center. And the terrain was difficult to attack.

Oda Nobunaga was convinced that he could dominate Osaka and even Japan and neighboring countries outside of Japan if he could capture this area.

Hideyoshi built Osaka Castle in 1583 during the Azuchi-Momoyama period (1574-1600). Large-scale construction work created a moat surrounding the castle, widened the rivers in Osaka, and developed the area as a transportation hub connected to the sea.

With the Tokugawa family in power, the political center of Japan shifted to Edo (present-day Tokyo). Japan then entered a period of national isolation. Osaka, which had become a city of ashes, quickly recovered thanks to the spirit of the Osaka people.

It grew again as an economic city. At this time, Osaka was called “the kitchen of the nation” far from Edo. This was because trading of imported goods, including food and rice, took place frequently in Osaka. Rice was sent from Osaka to all parts of Japan, supporting Japan’s food supply. Osaka also began to export many goods to foreign countries.

This series of economic growth led to the development of a unique culture in Osaka. Derived from the traditional culture, a popular art culture was also born for the common people to enjoy. Puppet theater called joruri (said to have been the forerunner of bunraku), Noh theater, and Osaka’s own Kabuki were also born. Osaka also contributed to education.

The schools founded in Osaka produced many scholars who strongly influenced Japan at that time. Tekijuku was founded as a school for the study of Western science and pharmacy, and in the mid-19th century, Japan broke its isolation and entered the modern era.

Among the students from Tekijuku were some who contributed to the opening of Japan to the outside world and reformed the Japanese government. This was later known as Osaka University.
Manchester of the Orient

The Meiji Restoration (1868) was the most significant reform in Japan’s history. The capital was moved to Tokyo, which grew greatly as an economic city, while Osaka, a city of commerce, stagnated. Osaka then attempted to transition to an industrial city.

By the end of the 19th century, Osaka was derided as a “city of smoke. The name given to the city was “Manchester of the East.

In 1889, Osaka was incorporated as a city. Soon after Osaka was officially recognized as a Japanese city, the 5th National Industrial Exhibition was held in the Tennoji area in 1903. The high-quality industrial technology and products gathered attracted the nation’s industrial and technological elite.

That same year, Japan’s first public streetcar system was launched in Osaka; by 1925, Osaka was the most populous city in Japan and the sixth-largest in the world.
Wartime Devastation and Reconstruction

One-third of Osaka was destroyed during World War II by U.S. airstrikes. Many commercial and industrial districts were also subject to the bombing. However, thanks to postwar reconstruction plans and the positive attitude of the Osaka people, the city’s prewar vitality returned.

In 1970, Osaka was chosen as Asia’s first World Exposition site. Since then, Osaka has continued to host all kinds of international expositions, conferences, exhibitions, and meetings, including the APEC Summit in 1995.

Osaka has it all: ample conference facilities to welcome guests from around the world, such as the Osaka International Convention Center, top-class hotels, fine cuisine, unique culture and history, and a wide variety of entertainment and leisure activities. Osaka is an important city in modern Asia and a world-class metropolis. 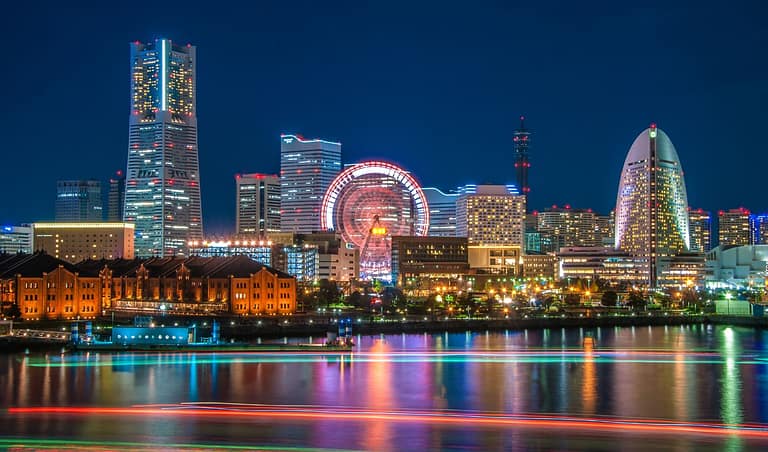