Sukiyaki consists of meat (usually very thin pieces of beef) or the vegetarian version made from tofu, simmered or boiled at the table, along with vegetables and other ingredients, in a shallow pot in a soy sauce mixture , sugar and mirin. Before eating it, the ingredients are put in a small bowl with beaten raw egg.

Sukiyaki is generally served as a single dish on the coldest days of the year and is usually found in b? Nenkai, Japanese New Year’s Eve parties.
A common theme in Japanese comedy is that anyone can make passable sukiyaki even on the tightest budget.

Like other Nabemono-style dishes, each region in Japan uses a preferred way to prepare sukiyaki. The main difference is in the style of the Kansai region in the west and the Kantō region in the east.
In the Kantō (Tokyo) region, ingredients are cooked in a mixture of soy sauce, sugar, sake and mirin, while in Kansai (Osaka, Kyoto) the meat is first grilled in a saucepan. The rest of the ingredients are put on top of the meat while the liquid is drizzled in the saucepan. Shingiku is added after the food is simmered. at the end one egg is added for each person.

We tried Sukiyaki at home too, with a pot he has at home.

It is very easy, just cut the vegetables and prepare good meat. It is done. You can put Ramen or some noodle in the pot too. 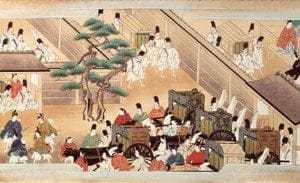