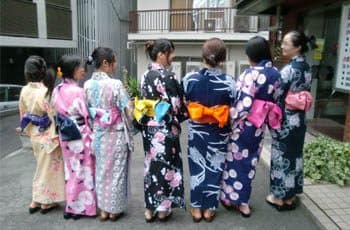 The yukata (浴衣) is a Summer dress Japanese that is used by both men and women. It is a traditional type of kimono, but more casual and for everyday use. This garment is particularly popular with young women used to wear at special events in the summer, such as fireworks displays or fireworks festivals. bon-odori. In recent years, the yukata has incorporated more modern and colorful patterns. Usually the yukata with a obi (帯 band) and geta (下 駄, wooden footwear).

The material from which the yukata It is cotton, which allows air to pass through. Unlike kimono wearing a type of underwearcheer), he yukata can be dressed without wearing cheer or tabi (socks), which makes it suitable for summer. He yukata It has been in existence for more than a thousand years, and was used by the nobility when taking a bath. The custom of dressing yukata it spread to common people between the 17th and 19th centuries.

The usual patterns in the dress had floral themes or images of grasslands in a background white or indigo blue. He yukata White was used to be at home, while blue was used to go out, since the aroma of indigo, which is the dye that is used, drives away insects. The use of this dress is associated with refinement, especially in the case of women. Since the very open movements of the arms or legs make the yukata spreads, this garment forces the wearer to take small steps and avoid sudden movements. That is why this dress is considered an expression of good manners.

In addition to the previous patterns, new, more colorful designs have now been incorporated. Today there are patterns of contrasting colors, like red and black, or that use primary colors like blue or pink. The patterns remain traditional motifs like flowers or grasslands, but with color blends that emphasize the contrast between the shade of the fabric and the color of the pattern. New geometric designs are also used as a pattern.

Also, do not forget the accessories that accompany the yukata. He obi is a band that fits the waist. If he yukata is of a cold color, a obi warm colored to stand out, or the same color to match. Young women also experiment with new designs, such as wearing a obi light and transparent on the obi traditional, and make an arrangement that resembles a flower on the back. He yukata dresses with geta, a wooden shoe.

He geta looks like a pair of sandals summer with handles that fit between the fingers. Finally, there are two accessories that are also used, which are the obidome and the kanzashi. The first is a brooch that is worn in front of the obi, and the second is an elaborate arrangement that is worn in the hair.

Recently the number of people who send to do his own yukata. Starting in May, many women purchase the fabric for their own clothing. Later they can be sent to be dyed, which is a process that takes three days between each fabric being dyed separately and patterns are added.