Ikebana (生 け 花） it is the Japanese art of flower arranging, which emerged from traditional offerings and became an art form. The word ikebana it literally means “living flowers.” In the middle of XV century, the ikebana It managed to have an art status independent of its religious origins, maintaining its nuances.

The true origin of ikebana is uncertain, but it is thought that when the buddhism came to Japan in the 7th century, this religion came with the practice of ikebana. The offering of flowers on altars to honor the Buddha it was part of their rites.

The first teachers and students of this art were priests members of the nobility, but as time passed many schools emerged, styles changed and the ikebana it came to be practiced at all levels of society. However the ikebana it has characteristics in common in all schools. 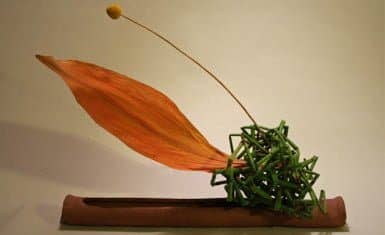 First of all, it can be used any type of plant material: branches, leaves, grass, moss, fruit and obviously flowers. Withered flowers, plant pods and shoots are also allowed. An arrangement of ikebana it can be composed of just one or more materials. The selection of these depends on the skilled eye, and their proper arrangement requires some technical skill to create something beautiful that cannot be found in nature.

The spiritual aspect of ikebana it is considered of great importance to its practitioners. Silence is an obligation in the practice of ikebana. It also serves as a time to appreciate objects in nature that people normally do not pay attention to in their daily lives.

One becomes more patient and tolerant of differences, not only in nature, but in general. The ikebana inspires one to identify beauty in all its expressions. It also serves to have a moment of contact with nature that provides relaxation for the Mind body and soul.