This creature is from Chinese origin, but due to cultural exchange it was transmitted to Japan. Descriptions vary, but usually combine the head and scaly skin of a dragon with the body of a hoofed mammal, be it a horse or deer. His body is usually engulfed in flames and he has the breath of fire. Sometimes it is illustrated with one horn, which is why it has sometimes been associated with the unicorn in the West, but it is also illustrated with two horns. Supposedly the “Ki” (麒) and “rin” (麟) that form its name represent the masculine and feminine of the species, although which is which varies.

The kirin share your name with the giraffe from the real world, and there is a possibility that the legends of this mythological being were inspired by giraffes that were brought to China from africa.

Although it is reckless in appearance, kirin They are pious and kind, and avoid harming any living creature, even the grass and insects under their feet. This heavenly being live two thousand years and he is only seen on earth once every millennium to herald a new age, and is said to appear at the birth of great and benevolent leaders. Supposedly the mother of Confucius found a kirin before her son was born.

The kirin they bless good people and those who worship them, however, they can also punish bad people. This creature is a symbol of peace, joy, serenity, prosperity, success and longevity. Historically the kirin it occupied the highest position along with four other divine creatures. However the image of dragon it was favored by the Chinese emperors and became a symbol of royalty. Consequently, the kirin he was associated with ordinary people.

There are several legends Over the kirin. One of them, already mentioned, tells the story of the birth of Confucius. According to legend, a kirin Confucius’ parents were presented with a scroll containing a message from heaven. In this message it was said that his son would be great, but that he would not be king. The next day Confucius was born and word spread that the kirin they had the ability to bring children. The word is also associated kirin with cunning and intelligent people. 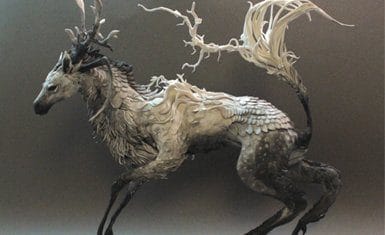 As well as the kirin they bring good news, they also appear when the death of a great person is about to come. Confucius is said to have found a kirin who had been shot while hunting, mistaking it for a deer. The event is said to have been so sad for Confucius that he stopped writing books after this. Two years later he died.

Today the image of kirin It has been popularized by pop culture and video games, but also because it is the symbol of the beer kirin.