Between 1467 and 1590, Japan went through a long period of civil strife between different samurai clans. This period, known as the It was Sengoku or “States of War” began with the War of Onin (1467-1477) and ended only with the Hideyoshi reunification, More than a century later.

In essence, Japan of the Sengoku Era was ruled by local militias of varying sizes, all vying for power. This era was characterized by general instability and constant bloodshed.

In 1536, in the village of Nakamura, within the Owari province, a peon and his wife gave birth to their second child; a male. The father, named Yaemon, worked as a soldier of the Oda clan. According to legend, the parents called their son Hiyoshimaru (Gift of the Sun) because his mother dreamed that a ray of sunlight entered his body, leading to him conceiving the son (perhaps this legend was an attempt by Hideyoshi to justify his direct lineage with the emperor, who is said to be the son of the sun).

Yaemon died in 1542, when his son was only seven years old, and his widow soon remarried. Her new husband also served Oda Nobuhide, the daimyō of the Owari region. Hideyoshi is said to be small for his age, skinny, and not very handsome. His parents sent him to a temple to be educated as a teenager, but the young man fled in search of adventure. In 1551 he joined the service of Matsushita Yukitsuna, who held the power of the Imagawa family in Totomi province. It was an unusual choice as Hideyoshi’s father and stepfather had served the Oda clan.

According to the official biography, Hideyoshi returned home in 1558 and offered his services to Oda Nobuhide’s son, Nobunaga. Perhaps it was motivated by the Imagawa clan’s decision to send an army of 40,000 to invade Owari, Hideyoshi province, on their way to the capital in Kyoto. The young man bet a lot with this decision, since the army of Oda only numbered 2 thousand people.

In 1560, the Imagawa and Oda clan clashed in the battle of Okehazama. Oda Nobunaga’s outnumbered forces ambushed Imagawa’s troops in a rain storm, and achieved a great victory. Imagawa Yoshimoto was killed in the fight, and his greatly reduced army had to retreat.

According to legend, Hideyoshi served in battle as a wearer of Nobunaga’s sandals, and apparently did not make a great impression on Nobunaga at the time. The first writing in which Hideyoshi is mentioned in the writings that survive today dates from 1570.

In 1561, Hideyoshi married a woman named Nene, sometimes referred to as One. She became his counselor and confidant, but was never able to give him a son. Six years later, Hideyoshi led an assault in which he captured Inabayama Castle for the Oda clan. Nobunaga rewarded him by making him general. By this time Hideyoshi used the name of “Hashiba”.

Soon Hideyoshi achieved great victories for Nobunaga, who rewarded him by making him the daimyō of three regions of Omi province. Nobunaga was in control of Kyoto, the imperial capital. Hideyoshi took the himeji castle in 1576, and used it as a base of operations against the rulers of the Chugoku region. These campaigns were so successful in 1580 that Nobunaga consolidated power in 31 of Japan’s 66 provinces.

In 1582, Nobunaga was betrayed by Mitsuhide, one of his generals, and forced to commit seppuku. Hideyoshi fought Mitsuhide at the Battle of Yamazaki, where he killed him. Then came moments of instability within the clan, as Hideyoshi supported that Oda Hidenobu (Samboshi)Nobunaga’s grandson, rise to his power. Shibata Katsuie, another important general, supported that Nobutaka, Nobunaga’s third son, was the one who led the clan. They both fought in the Battle of Shizugatake, where Hideyoshi lost to an army twice his own, fled to Kitanosho castle where he was besieged, and finally set the castle on fire and committed seppuku.

Finally he managed to make peace with other generals such as the Tokugawa and Shibata, distributing land to them. He did the same with Samboshi and Nobutaka, assuming power himself. In 1583 the construction of Osaka Castle began, a symbol of his power and desire to rule all of Japan. He ordered the restoration of the Imperial Palace and offered large sums of money as an offering to the imperial family.

During Hideyoshi’s government, he sought take power from the monks Buddhists, who in some regions were still within insurgent movements. As a strategy, after taking their weapons and looting them, he offered them sums of money to restore the temples and gave away portions of land. At this time it also seized the Kyushu Islands, which were an important port of income for products from China, Korea and Portugal. Many Kyushu generals had converted to Christianity under the influence of the Portuguese, some forced, and many Buddhist and Shinto temples were destroyed.

Hideyoshi organized an invasion with 250,000 troops in 1586, took the island with the help of some daimyōs who supported him and drove out the Christian missionaries. Also in 1590 he organized an attack in the Edo region, defeating the Hojo clan. Hideyoshi fought with the support of Tokugawa Ieyasu and Oda Nobukatsu, in addition to having a naval force that stopped Hojo’s forces at sea. Hojo Ujimasa he retired to Odawara Castle to wait for Hideyoshi.

The siege of the castle lasted six months, and it is said that while Hideyoshi’s army held tea parties and festivals, inside the castle they gradually lost their morale. Ujimasa’s brother was sent to the castle to demand his surrender, but Ijimasa did not yield. Then the attack began, Ujimasa surrendered and was forced to commit seppuku. His brother was exiled and his property was confiscated.

During his rule, Hideyoshi organized a campaign to take away the arms of farmers and monks, to move towards peace. Buddha statuettes were made from the metal of the weapons. Further, prohibited the hiring of ronin (mercenaries without a master to serve) and the entry of farmers to cities to become artisans or merchants. Hideyoshi’s intentions were to establish a rigid and immutable social structure. Whoever was born a farmer, died as such (contradictory, since he, being the son of a farmer, was the governor of Japan). In addition, it established as a rule that the women and children of the daimyōs should go to the city, where they were practically hostages, this to ensure the cooperation of the daimyōs. Lastly, Hideyoshi was the first governor to establish a general census of Japan.

In the last years of his life, he was remembered as a bloodthirsty person and violent. He had his cousin executed on suspicion of conspiracy, and his entire family was also executed, except for a one-month-old daughter. He also had several Franciscan monks crucified. His ambition to conquer more territories led him to two sorties to Korea, in which he was severely defeated. 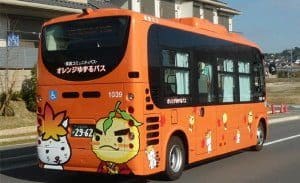