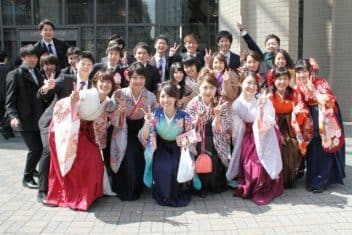 The hakama is a type of traditional clothing worn by men. However, during graduation ceremony in Japan almost all women use a Female version. Where does this tradition originate?

In the Meiji period, the hakama it was adopted as the uniform in schools, and even the teachers wore it. At that time, the number of women entering higher education schools was relatively low, so they were given special treatment; The status they were given was “Female student”, and not of “student” like men. For many women, having this status was considered worthy of admiration. The tradition of wearing hakama at the graduation ceremony it just comes from this time.

Specifically, in 1968, the women’s school Hanatabi It was the one that was inspired by the court clothes to resume the use of traditional dresses.

Before the Meiji Restoration, he hakama It was used in the Heian period as part of the Juunihitoe (a type of clothing worn by members of the court). In the case of samurai, this was used specifically for ceremonies. However, during the Edo period, its use was prohibited for women, with one exception: Courtesans. The rest of the women had to wear a type of garment that was longer and looser.

This prohibition continued until the Meiji period. The government decided to make an exception for the use of hakama males in the case of female students. However, it was strange for a woman to wear men’s clothing. This era also coincides with the introduction of Western culture and a resurgence of Japanese identity in response.

The restoration of court dress in higher education was well received by many. Compared to him kimono, he hakama allows greater freedom of movement, without losing elegance and formality. These were the reasons behind the adoption of the hakama like uniform. However, with a greater influence from the West, the adoption of the skirt as a uniform was inevitable, and its use was relegated to graduation ceremonies.

Contents 1 Unicorn Gundam Statue On the futuristic island of Tokyo, Odaiba, in front of the modern shopping center “DiverCity”,…