When visiting Japan, visiting Japanese castles is essential because appreciating the originality and complexity of each of them will serve to learn about the history of the Japanese country. Unlike the European castles, the castles of Japan were not built to be used as houses but were mostly fortifications.

Evolution of the Japanese castle

The history of the Japanese castle dates back to the Yayoi period (10th century BC). The Japanese began to build moats to protect themselves from wild animals and then when conflicts began between men, they built the walls. We can see a reconstruction of these settlements in the Yoshinogari Iseki moat, located in Saga Prefecture.

In 663, after the Japanese defeat to the Tang dynasty at the Battle of Hakusukinoe, numerous fortifications began to be built on the coast and in the mountains. From the 12th century, the lords and vassals of the shogunate began to develop their activity around the castles. In the Sengoku period (late 15th and 16th century), in which military conflicts followed, the vassals or lords of the Shogun lived in their houses at the foot of the mountain in times of peace, and in times of war they shut themselves up in its castles, usually located at the top. At this time the towns called Jokamachi (whose literal translation is ‘village at the foot of the castle’) appeared, built to supply the castles.

Firearms were introduced to Japan in 1543, changing the way of warfare forever. In 1576, Lord Oda Nobunaga ordered the construction of Azuchi-jo Castle, considered the first modern castle. These castles were no longer solely defensive structures, but became the residences of the lords and centers of economic and political activity. For this reason they stopped being located in the mountains. In addition, modern castles were raised as a symbol of lordly power, the stone walls and the Tenshu tower being characteristic of these. After the unification of Japan by the Shogun Tokugawa Ieyasu in the early 17th century, the lords were ordered to build modern castles throughout Japan, reaching as many as 25,000 castles. However, in 1615, the second Shogun of the Tokugawa Dynasty ordered to maintain only one castle per state to reduce the power and wealth of the lords.

In 1873, after the Meiji Restoration (that is, the transfer of power from the shogun to the emperor), the emperor ordered the abolition of castle power in order to modernize the country; for for the emperor, the castle was a symbol of ancient Japan.

Tenshu: It is the central tower. It served as a watchtower and also as a symbol of each castle. We can distinguish 2 different Tenshu: in the ancient castles (built before the EDO period), the Tenshu is a kind of terrace on the top floor that was created after the construction of the main building (Bourou type) and for modern castles, the Tenshu is a single building that goes from the first to the last floor (Soutou type). Shachihoko: It is a mythological fish, placed on the ceiling, which is the protective deity against fire; It has the head of a dragon and the head of a fish.

Ishi-Otoshi (literally: falling stones): It is a protective equipment. The castle floor is arranged in such a way that the stones from the castle can be removed to be thrown out the windows at the enemies who were trying to scale the walls.

The original fortress was built in 1346 by Akamatsu Sadanori .. The castle was entrusted to Lord Ikeda Terumasa (son-in-law of Shogun Tokugawa Ieyasu), who contributed to the victory in the Battle of Sekigahara, and the castle reached its present form in 1609. The The most distinctive feature of this castle is its white color, hence its nickname Garza Blanca. It was declared a World Heritage Site by UNESCO in 1993. It is a beautiful castle with an extraordinary defensive art: curved fan-shaped walls, labyrinthine construction, holes for weapons …

It is up to you to find out.

Surrounded by the Japanese Alps, Matsumoto Castle stands as a black guardian god, hence its nickname of Castle of Ravens. The first construction dates back to 1504 by the lord of the Ogasawara region. The castle began to take its present form in 1590 by Lord Ishikawa, who was named owner by Toyotomi Hideyoshi, and who built the well-known keep in 1594. From 1615, the castle lost its defensive function and became the town hall.
The contrast between the black color of the castle and the green-white colors of the Alps is splendid.

It is located in the city of Matsue, in Shimane Prefecture, and is the only existing castle in the southwestern region of Japan. It is one of the very few of the original twelve whose construction date is known with certainty thanks to the prayer plaques found in the basement: it was built in 1611 by the lord of the Horio region. It is the only castle in which there is a well inside the building.

There are about 200 castles that can be visited, but we advise you to start with the original 12. 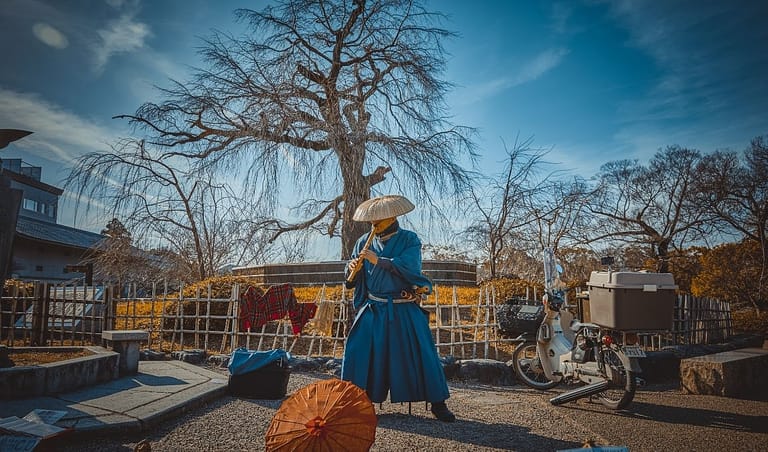