The Japanese uniform (制服, seifuku) is interesting because it presents a great variety unlike western uniforms. If you’ve ever seen a series, you can get an idea. These uniforms were introduced in the 19th century, and today they are almost universal in both public and private schools. They are also used in some women’s colleges.

Origins of the Japanese uniform

Over time, schools changed the style from the classic Japanese uniform to a more western one. Associations with Japan’s military past were wanted to avoid, and for this reason the style of the uniform was modified.

Uniforms are not required in most elementary schools. When asked, they consist of white shirts, shorts, and a hat. Children dress a little more formal for ceremony photos. Girls’ uniform may include a pleated skirt and a white blouse. Occasionally the sailor uniform is also used. It is also common for young children to wear brightly colored hats to avoid accidents. 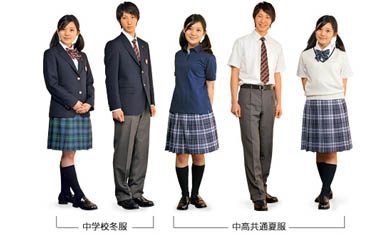 The dress code varies by season. There are two dates, which are June 1 and October 1. On these dates the type of uniform changes. There are two versions: one for summer and one for winter. Sometimes there are changes in color and design from one uniform to another, but it depends on each school. As for sportswear, since they do not have separate locker rooms or locker rooms, many students change clothes in the classroom. As a result, many students wear sportswear under the uniform.

Another interesting phenomenon is the way in which students rebel against the use of uniforms. The girls wear baggy socks, or if they wear the regulation socks they sew stickers on them or put colorful buckles on them and shorten the length of the skirt. Boys wear flashy shirts under the white shirt, or wear the tie with the loose knot. Some schools regulate the hairstyle and even the type of backpack that should be used.

Finally, a tradition that occurs at graduations is that girls ask boys that they like the second button on their uniform. It is said to be the button closest to the heart, and it saves all the feelings that were accumulated in school.