On the futuristic island of Tokyo, Odaiba, in front of the modern shopping center “DiverCity”, is the life-size statue of one of the most iconic characters in Japanese animation, the giant robot “Gundam”.

First released in 1979 as a television series, the highly successful Gundam Series franchise also included manga, movies, collectible models, among others. The series is set in the future when humans have colonized space and use humanoid combat vehicles called “Gundam mobile suits.”

The Unicorn Gundam is the newest attraction in the franchise. The model is a life-size replica of the RX-0 Unicorn Gundam from Mobile Suit Gundam UC. This statue is 19.7 meters tall. The Gundam is normally in Unicorn mode, marked with a single antenna sticking out of its head. However, at specific times, the Gundam can be seen in Destroy mode.

During the transformation, the armor plates are shifted to one side and the unicorn horn, which is actually an antenna, splits in two and takes on a configuration similar to the ornamentation on a samurai helmet. The process takes about 10 seconds.

Besides the Unicorn Gundam, the Gundam Café can be found, just behind the statue. Despite the name, the cafe has no room to sit. Instead, it sells Gundam-themed take-out snacks and souvenirs. Also, next to the statue is a small store called “Gundam Trailer Shop” where objects related to the franchise are sold.

On the seventh floor of the “Divercity” mall there is a larger official store called “Gundam Base Tokyo”, stocked with Gundam models and many other collectibles.

The Gundam is one of the most important icons of the island of Odaiba and a symbol of the high technological level of Japan. 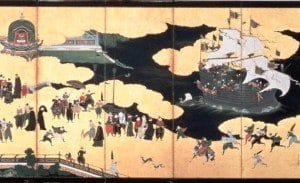 Tourist sites with incredible landscapes abound in Japan. There are landscapes that take your breath away due to their natural…