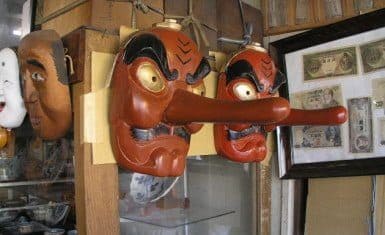 Restaurant owners frequently hang out in their stores character masks with red face and long nose. These characters called tengu (天狗) they are said to inhabit the mountains and are unpredictable beings. Many believe that this combination of human and bird live in enchanted forests, covering great distances in seconds thanks to their wings, and with glowing eyes that stalk unsuspecting humans.

It is said that tengu enjoy cause chaos and confusion in the world of humans punishing the vain, annoying the powerful and rewarding the humble person who does not fear them. Sometimes they kidnap people and leave them lost in the forest in a state of dementia called tengu-kakushi, but sometimes they are also invoked so that the lost children find their way home.

Like several others yōkai, the tengu they have the ability to change shape, and use it to fool humans, but their natural state is in the form of a bird. They hatch from huge eggs and nest in trees within the forests of Japan. Although they are associated today with crows and magpies, the first bird they were identified with was apparently the Milvus lineatus, the kites, which are small raptors. Lafcadio Hearn, an Englishman who lived in Japan for many years, described his behavior as insolent and aggressive towards humans.

In traditional art tengu are portrayed as beaked human creatures or a long, beak-shaped nose, wings and feathers on its tail and back, and with claws on its hands and feet. Some illustrations depict them with scales, pointed ears, mouths full of sharp teeth, and bird’s feet. Like many demons, they are associated with the color red.

Perhaps it is due to the confusion between these creatures and the long-nosed Shinto deity Sarutahiko, that the tengu they are represented with a red face and without avian characteristics. This occurs commonly in traditional art, such as mask masks. tengu found in various restaurants. These masks are said to represent the dai-tengu (Great Tengu), who has flocks of tengus called ko-tengu or karasu-tengu.

Other creatures close to the tengu are the yamabushi or shugenja, a sect of warrior monks who sought power and enlightenment living in a wild and inhospitable environment in the mountains. The yamabushi share several characteristics with tengu, such as living in distant places and having a bad reputation, so they associated with these creatures, and they in turn considered the tengu as sacred beings. Even to tengu They are usually drawn wearing the clothes of these monks.

The origins of the legend of the tengu they are unknown. Some consider them to be descendants of bird-shaped deities, but external influence can also be traced. The name of tengu comes from chinese tian-gou and both are written with the same characters. The tian-gou was an evil being that lived in the mountains, and while tian-gou means “celestial dog”, its descriptions are very varied. Other origins can be Garuda, a Buddhist deity or the god of thunder Lei gong.

For Japanese Buddhists, tengu they were evil beings at first, and they devoured children and led Buddhist monks to hell. Several stories told of monks defeating demons, and returning to the form of a kite after dying, but in other stories it is said that monks tengu they converted to buddhism.

Later there was a syncretism between Buddhism and Shintoism, resulting in an acceptance of gods of both religions. It is at this time that they went from being evil and cruel creatures to mischievous beings, who sometimes helped lost children to get home. They also began to be portrayed with elongated noses.

The tengu were still dangerous to those who threatened their homes or insulted them, as the tengu are considered arrogant beings by nature. In some traditions it is said that the tengu it is the resurrection of a very proud monk or samurai. Long noses are considered a symbol of vanity, and indeed the expression tengu ni naru (become tengu) refers to overly proud people.

Pachinko is a Japanese game/gambling machine that could be described as a cross between a video slot machine and pinballs….