Although many do not know it, including the Japanese, the Christianity has a long history in Japan. The usual date of the arrival of Christianity is in 1549. However, some think that there is enough evidence that they came to Japan through India, China and Korea in AD 199, and that by 400 there were already churches in Japan. 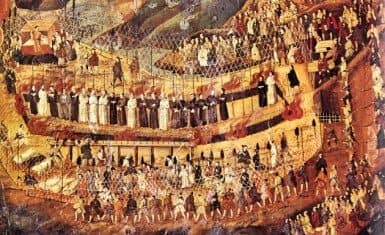 In 1549, the Portuguese Jesuit priest Francisco Xavier came to Japan. His fervent submission to suffering caused several people to convert in a short time. However, the church over time adopted extreme methods, integrating Buddhist and Shinto elements and using feudal lords to force other people to convert. The shoguns they were also convinced to convert to Christianity as a strategy to soften relations with Europe. However, the constant fights between feudal lords ended in the persecution of more than 280 thousand Christians. In 1626 Christianity was outlawed, and for the next 250 years Japan closed its doors to the rest of the world. However, Christianity endured.

It was in the XIX century when the naval force arrived from Commodore Perry and they forced Japan to open its ports abroad. In 1859 the first Protestant missionaries arrived in Japan. In 1868, the Meiji Emperor attempted to modernize Japan, importing the most advanced technology and the most prestigious scholars from the West. Japan also sought its expansion in the rest of Asia. Japan’s defeat in the Second World War it marked Japan’s first defeat by an outside power, and it was forced to adopt a democratic constitution that guaranteed freedom of religion.

Despite this, Japan has been a country with little christian influence, as it is still seen as an external religion. The hymns and songs that are sung, its architecture and internal decoration, are not typical of Japan. Today churches have few attendants, consisting of 20 or 30 people, of which the majority are women. Christians are a small minority consisting of less than 1% of the population.